After registration, you will receive at the e-mail address all the information necessary to access the selected services.

In order to use the shopping area please log in or register.

Thanks for your research.
Please wait. 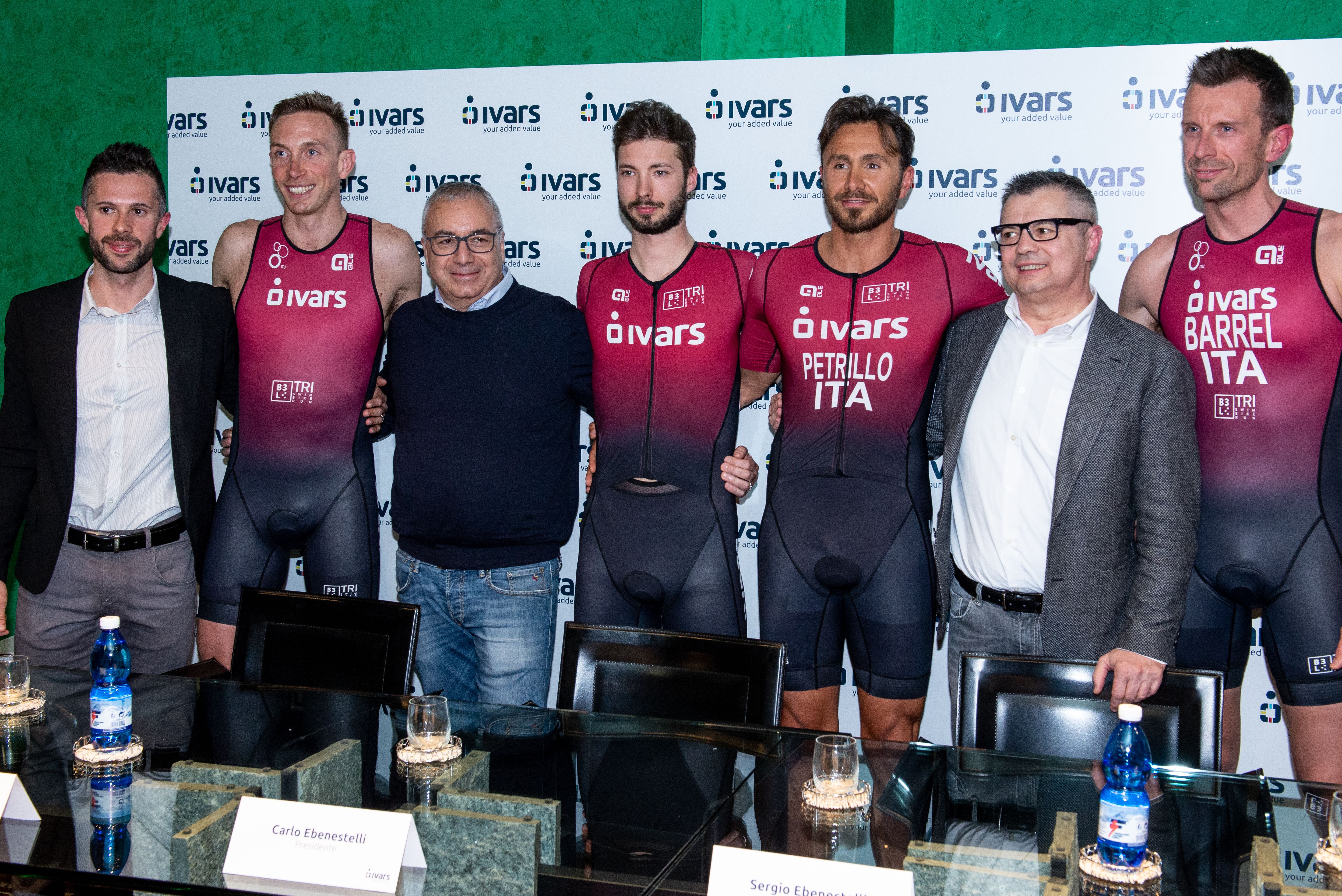 Deep-rooted knowledge, friendship and ties to the territory are the main factors that unite the protagonists of "Ivars B3L Triathlon" the new Ivars Triathlon team!

An important challenge that the company, the athletes and the fitness trainer have welcomed with the spirit that distinguishes and unites them.

In fact, for over 70 years Ivars has been the protagonist of great challenges and important goals, through constant commitment aimed above all at enhancing the value of man.

Man being a human resource that contributes to the company and also a customer; always at the centre of the company's evolutionary process.

The people at Ivars, just like the athletes of "Ivars B3L Triathlon" know the meaning of fatigue and sweat, and the sacrifices inherent in each challenge to achieve the best result.

Value comes from every person involved in this enterprise.

The team is therefore the result of a perfect communion of intentions and vision with the company, where man is always at the centre.

Carlo Ebenestelli, President of Ivars totally sharing the values and principles of the "Ivars B3L Triathlon" Team, blends his ambitions with enthusiasm, declaring: "I wish the very best results for the athletes and all the members of the team, so they find maximum satisfaction from their efforts and work."

The same Sergio Ebenestelli, Vice-Chairman of Ivars and a great supporter of the Team confirms: "It is a joy for us to support young people from the Vestone community, who have distinguished themselves for their commitment and results in such a hard sport... Despite the international importance of the company, for us at Ivars, our roots and territory have always been significant."

Sergio adds: "... just like at Ivars, what is fundamental is that the team works in a united and cohesive manner, transmitting the passion of each member, in order to achieve clear and specific goals".

mission is Ivars able to advance and grow; this is the best

Born in Milan in 1982, residing in Vestone since 2004. Former footballer and marathon enthusiast, in 2013 he experienced his first Triathlon Super Sprint in Milan, where he won the overall podium. This is how the adventure begins, followed by, among others, the Elbaman on Ironman distance, where in 2018 he came 25th overall, and the Venice Challenge, again in 2018, where he managed to qualify for the 2019 World Championship in Samorin. In 2019, in addition to all the Ironman vehicles, Ironman Italy awaits him in Cervia.

Born in Gavardo in 1984, raised in Vestone, now residing in Bagolino. A passionate cyclist over the years, he has also approached swimming and running and in 2012 he chose to put himself to the test in the Triathlon and obtained several overall podiums in the following years. Specifically:

- in 2014 he was Italian Duathlon Classic Champion, category S3.

The 2019 season started with 2nd place overall at the Duathlon Sprint in Manerba. Other events in 2019: Riccione Medium Challenge Triathlon and Idro Medium Triathlon.

Born in Vestone in 1979, currently residing in Idro. From 2000 to 2004 competitive player for the water polo team of Canottieri Garda, Salò. In June 2012 was his first Sprint Triathlon race in Idro, followed by many others, including the important Elbaman 70.3 in September 2018. In 2018, he qualified 3rd in the S4 category in the fifth stage of the Iron Tour Road on the Island of Elba and 2nd in the S4 category in the general ranking of the Iron Tour Road. In 2019, Idroman awaits him in Olympic distance, as well as the Elbaman distance 70.3. His goal for 2020: his first Ironman!

Born in Gavardo in 1992, residing in Casto. Former pro cyclist, he has raced in Androni Sidermec. Triathlete on his debut, for this first year he will mainly focus on Sprint races organised in the territory. His next goal: the Olimpico!

In 2008, he graduated in Sports Science and began his career as a fitness trainer. Since then he has followed many athletes, from amateurs, age groups to professional athletes (the Frapporti brothers, Simona Frapporti, Alessandro Bisolti and the MTB Bottecchia Team). He is a FITRI Triathlon and "athlete" trainer.

Are you already registered and do you want to cancel? Fill in the fields above and click here